In 2014, I was a 32-year-old, politically active, government employee and a hard-working individual. I had the world in front of me. I had a golden pension. I was a local councilorand I had just stood for Parliament. My ambition was inoverdrive.

The best part of that year was getting married to my wonderful wife Kate. This story is not really about me to be honest as I would probably be dead if it wasn’t for Kate.

Some people may say that that is an over exaggeration but for me it could well be true.

The reason is a month after our wedding I sustained a spinal injury meaning I couldn’t feel anything for the waist down. At the time we didn’t know what it was and it was two years later we got a name ‘Cauda Equina Syndrome’.

Now the sad thing is that Kate and I had a whirlwind relationship. We had only known each other a year and in that year, we decided we want to spend the rest of our lives together which was fantastic.

Kate had a good job. I had a good job and we bought a house and everything was going brilliantly and we were planning to have a family. Everything however came to a stop following the injury and not only did I lose my sexual function, I lost the control of my bowel my bladder and then following deterioration I lost the use of my feet and now can only walk a few feet with a zimmer which now means that I am wheelchair dependent. One of the very worst things to do with my injury is this; I can cope with catheterising 10 times a day, and the incontinent pads but having what I call epilepsy of the legs, where you get shooting pains anywhere down the lower body that can last for a few hours to a few days and being in so much pain that you can’t control it. It just paralyses you to the point where you’re screaming in bed for 2–3 days and when it stops you’re so tired because you’ve been clenching your body it feels bruised and you’re so tired that you just want to cry and this happens on a regular basis. I have been told by my spinal specialist that at present there is no treatment for this.

So, I had this fantastic career going for me, I had my wonderful wife and we were about to start a family but within a couple of months all that ended. I had no choice but to takeill health retirement. We were unable to start a family; we had to sell our home, moving to more suitable disabled friendly accommodation. We had a three bed semi-detached but it didn’t quite cope with a wheelchair.

Ability Access started in 2016 and was set up on Facebook. After a year and a half of physio hospital appointments, operations and God knows how many treatments I finally got to the point where I could get out in a wheelchair. At one point I was told I would never sit up again so being in a wheelchair and going out was a delight.

During my time with Kate I remember sitting in hospital having a very deep discussion as this is something that Kate didn’t sign up for. We had only known each other for a year and she was given the option to turn away, and if she had I would not have held it against her. I would have completely understood. She has however stuck with me, cleaning up my shit, my piss, sitting with me through the shooting pains, helping me get out into the community. My wife has been the most amazing support. She is the most fantastic woman in the world and I love her with all my heart, but I also believe that we have a strong bond, as strong as people who have been together say sixty years, through a lifetime of ups and downs, injury and pain, and we’ve done it in five.

We went to my favorite Spanish restaurant in Leicester. This is Tapas restaurant and I love Spanish Tapas; however, this was my very first experience in a wheelchair in the community and not going to somewhere like the hospital.

The first problem was I could not actually get through the door. The door was so narrow my wheelchair wouldn’t get through so had to go round to the front of the building using a portable ramp, however in front of the disabled access there were two people eating a romantic meal and so for me to get in, we had to disturb their meal and move them out the way to get in and then the table had to be replaced in front of the disabled door. I was thinking, ‘is it really worth it’. Anyway, we got in and an hour later I needed the toilet but again it not being disabled friendly I couldn’t use it so we had to rush our meal and come back home straight away so I could go to the toilet. Now not being able to get out for about a year and a half you can imagine this was really disappointing. I didn’treally want to pay for the meal because the access was so poor, and then I realized that most places were going to be like this for me in a wheelchair. I wanted to raise awareness of this. I wanted to raise the level of discussion about this and so Ability Access was born in September 2016 on Facebook.

Personally, I didn’t think it would go anywhere. I thought people must have tried this before. After all wheelchairs have been around for centuries so how could I make a difference? Anyway, within a couple weeks it had a few hundred followers. I thought this was fantastic and I got 1000 hits and very very slowly people started sending in images and within a couple weeks I had a Dragon from Dragons’ Den following me which I thought was pretty cool. So I applied for things like The Apprentice, Dragons’ Den, I applied for grants, I was at university at the time as I had returned to retrain as a journalist so I could do some writing in my spare time and try to earn an income and become a published author (but that’s a different story). While at De Montfort University I won the university’s ‘Jesse Jackson Prize’, for breaking down barriers in the community and it came with a cheque of £1000 which was just so nice. With this thousand pounds I decided to buy some stuff with the Ability Access logo on and business cards, headed paper and other office equipment.

This was the first time I realized that I may be on to something. I’d never won anything. Back when I was 10 years old my sister and I designed a poster for the local newspaper for the Fire Brigade, but because hers was better I swapped the names over and I got second prize. I wanted some Leicester City Football Club tickets. That’s the only thing Ihad ever won and I cheated on that.

So, getting the Jesse Jackson Prize for breaking down barriers in the community was fantastic recognition and it gave me theenergy and passion I needed to take this a bit further.

So day by day I started posting things on Ability Access. Videos, images, information and advice and it just keep growing and growing and in the first year I got 131,000 hits. I was actually so overjoyed that I did a stupid video of me singing to celebrate and then the following year I got a millionhits and now after a the first million I was thinking, ‘Oh my God where is this going?’ At the same time, I got nominated for a national award at the National Diversity Awards and so Kate and I headed up to Manchester for a black-tie awards evening with a GMB weather presenter whose name I can’t remember off the top of my head. I attend the event with one black shoe as I had lost my shoe somewhere along the way, which is an occupational hazard for people who cannot feel their feet.

Later that year I started my podcast ‘While Disabled’. I traveled around the UK interviewing disabled celebrities. Now the podcast ‘While Disabled’ took me by surprise. It isme sitting down with a celebrity for an hour or so talking about how they became disabled or how they have managed living with a disability. What I wasn’t prepared for was the impact it was going to have on me because in doing this, youget very personal very quickly with a person you don’t really know and you are finding out their most intimate details andtheir most intimate experiences. So, while it is only an hour on the podcast you spend a up to a day with them and you become firm friends very quickly because you know why they are sharing their story as it is a story that needs to be told. We also have a lot in common and a lot to discuss because while we may have different disabilities, we still have similar issues, like accessing public transport, access in restaurants, keeping jobs, anything to do with going outside and we try and help one another and support one another but also what I didn’t realise is how small the celebrity disabled community is. Everyone knows everyone else and it is a fantastic community who are just behind one another all the way.

Coming back to Ability Access and the reason for this article is because within a few years I’ve gone from nothing to an audience of over 20 million a month.

Because of Ability Access I was also told, and it was reported in the Independent Newspaper that I was the fourth most inspirational person in the UK which is fantastic. I’ll take that any day, who wouldn’t?

I am also the first disabled person to be elected to the Committee of the National Trust which I am really looking forward to as I can use my experiences in improving a national organization, and to think just a few years ago I got told I would never sit up, so that’s not so bad.

This year my have had its challenges but I published my first of six comic book series called Three Blind Mice and now a production company Branded Studios whats to turn our story into a feature film and with other exciting tv projects on the horizon 2021. But most importantly with the assistance of Kate and some friends we are setting up a brand new charity called Ability Access Legal which is represent people completely free of charge who face disability discrimination. So with all its woes still looks to be a great year and it’s all down to my wonderful wife.

On set of ‘Finding My Feet’ with Graham Cole and Adam Pearson. 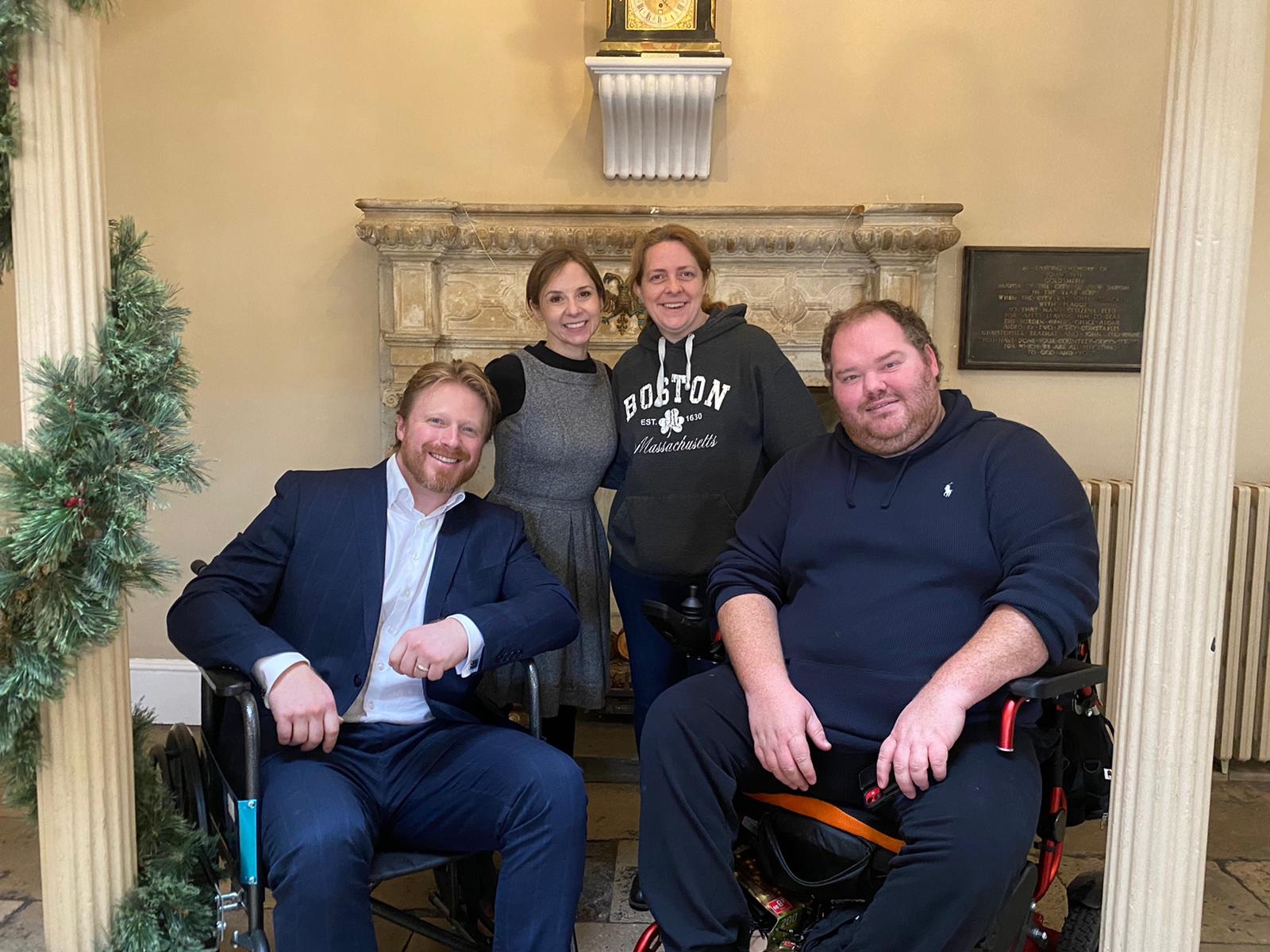 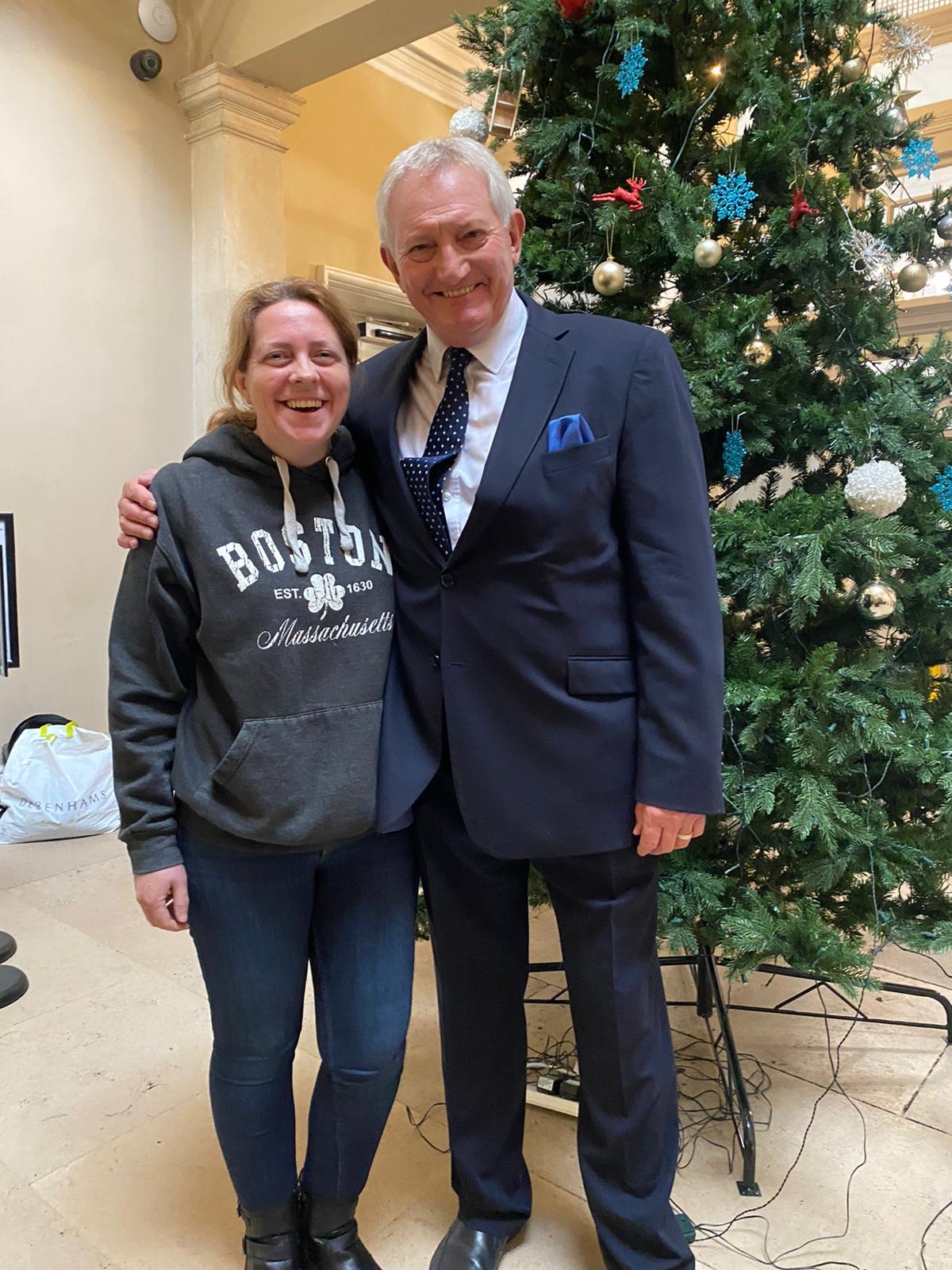