Ability Access is the largest disability page in the UK and reaches over 20 million people a month and the news feed has been suspended (again) stopping tens of thousands of people from talking about disability and sharing their stories.

Three weeks ago, Simon Sansome the founder of Ability Access posted a video explaining that the Facebook page had been restricted by the world’s largest social media company.

Facebook have now placed restrictions on the account again by suspending the news feed, where followers can post videos, images and ask questions to people in similar situations, who may be able to help. There has been no explanation and followers are asking why this keeps happening to a page that promotes diversity, inclusion, raises awareness and campaigns for disability and mental health issues.

Simon said; “I have contacted the press office, I have appealed, following their instructions online and as yet I have not had a response and will not be expecting a response this time as they are now just ignoring Ability Access and tens of thousands of followers.

The whole idea of Ability Access is to get people talking about disability and we cannot do that if they keep suspending the account for no reason. From my point of view, it appears Facebook just don’t like disability.’ 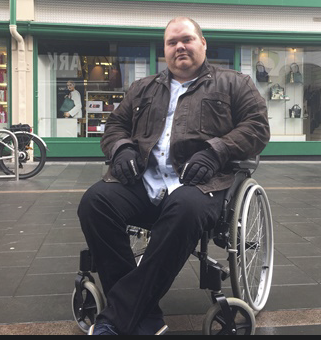 When Simon got the message that the page had been restricted again, he sent the following message to Facebook… 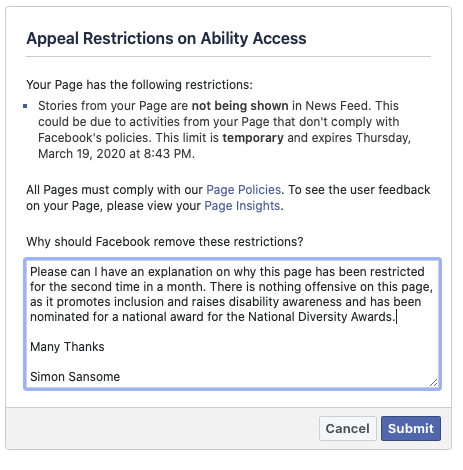 Simon added; ‘I have read Facebook’s own policy and I cannot see anything on this page that is against their own policies and procedures.’

Please can I have an explanation as to why this page has been restricted for the second time in a month. There is nothing offensive on this page, as it promotes inclusion and raises disability awareness.

Facebook have suspended the news feed account for a week meaning people will not see any new news stories relating to disability on this highly successful platform.

1 thought on “National Diversity Award nominee suspended by Facebook for the second time in a month for promoting diversity and inclusion.”